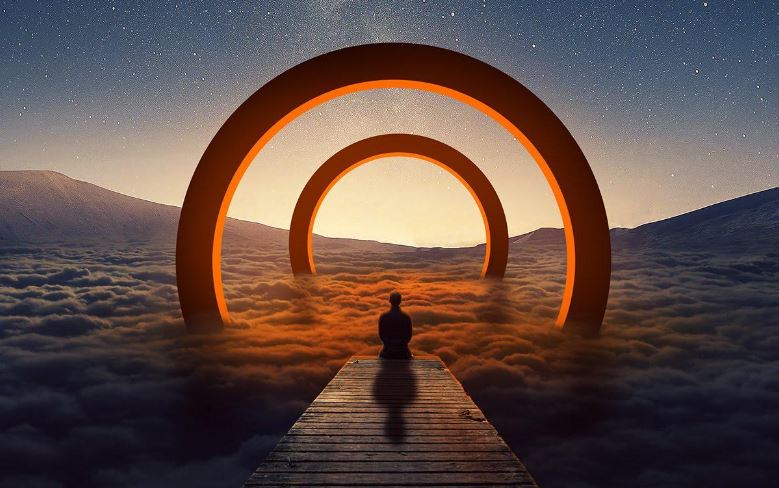 The expression and its origination — no that’s not right. There is no origination, cause or source. It simply Is, expression expressing, life life-ing, the inherent nature of the design. Even design goes too far, but alas, words collide and make ‘not two’ into a string of somethings. They just can’t help themselves.

The Human and The Divine — both intentionally in caps — are not two. Dividing them up into pieces — let alone assigning them meanings like good and bad, is the cause of all our heartbreak, our senses of loss, the idea that we could be abandoned, rejected, harmed that we project into the world and go to war against.

Most of us see not the divine, and reject the human, leaving little grace in our worlds. It seems impossible to fully embody either one, to say nothing of both, so we place the first outside of us, and the second becomes an afterthought.

No wonder we suffer. It isn’t surprising that as our beliefs harden, our arteries do too, that our bodies grow ill, age deleteriously, and we have difficulty standing, let alone walking freely? Beliefs pile on the older we get, the more experiences we have until … well, you know what occurs. Life … death … the cycle of samsara in perpetuity,

Unless we risk — and we won’t, we can’t, until we’ve simply had enough of life as it is lived by the masses, until we are beaten down, tenderized and simply surrender. Life will continue to display the wound based resistance until that moment.

That’s what life is, an eternal display of the inner dimensions of its expressions.

And we are That — the grand display, displaying one individuated appearance in the illusion of time and space times several billion, trillions if you include the animal and plant kingdom.

Life, the illusion — and it is all illusion — is not what it appears to be — is reflective of the inner states of its characters. God literally doesn’t come to earth without us. We create the concept of God. It is the reflection of an inner need, a wish-fulfillment.

God — the energy of all life, that which has been named consciousness, awareness, chi, ki, Brahman, Allah — also doesn’t come to earth other than through its expressions, as its expressions, expressing as the manifested world.

Beliefs fuel the manifestation and as long as one belief remains, any belief, all beliefs, creation must be one of ones and twos. There is no out of separation that includes individuation for individuation is separation … and it is nothing but a belief, the first belief on which all others hinge.

Once it lets go, once the separate self sees life for what it is, manifestation begins to flow naturally out of the belief-free purity of itself, the natural unaltered unimpeded sacred ordinary perfection.

It seems to take a bit for habituated body memory to release but it’s no longer work. There’s no longer someone holding on. Impatience which belongs to the dissolving individuation lessens. Illusory mental meanderings wind down, and the entire manifestation takes on a new look and feel.

Is there anything you can do to hurry along the revelation? At the least, it seems so. Gorge yourself on life. Experience it to its fullest. Climb to the top of the mountain and slide back down. Quench your thirst for all things this adventure holds. Cut your teeth on life. Life, your life, is the holy grail. It is the portal to, the actuality of, and the entirety’s full potential. You are That which lives and that which is all life. Go forth with gusto!