Mirror Mirror on the Wall … 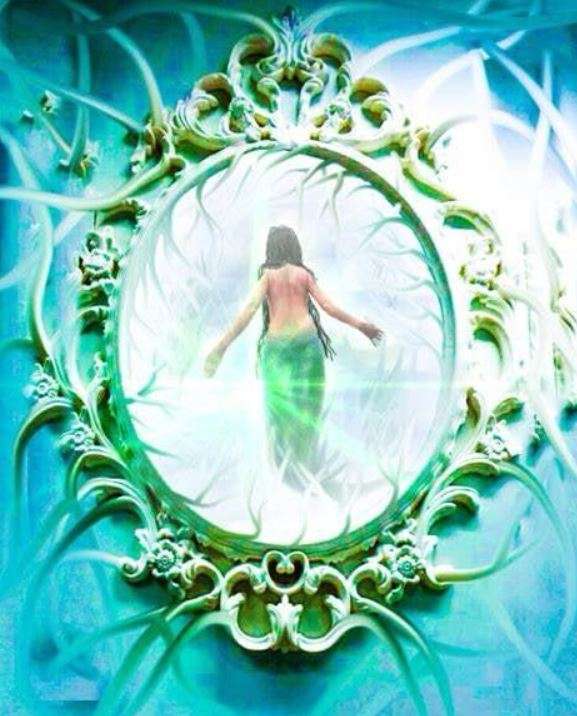 I don’t think I will be successful relaying my thoughts this time. I barely can see them myself … and I need to write them down for me, not for anyone else. It’s one of the ways this I am makes sense of insights, one of the ways they are integrated within.

Do you look in the mirror and like what you see? Perhaps you have quit looking in the mirror and just walk on by. I have a rather large mirror on the bathroom wall just outside the shower. What was I thinking I’ve been noticing that I rarely look at it … when I am naked. Clothed, no big deal, but my nakedness seemed to repel my eyes.

Being me, I had to explore. What lay wrapped in the cocoon of blindness? What self-judgments were tightly held within that repulsion?

When I was small my dad told me I wasn’t beautiful, that I would never be a racehorse — I had inherited a short body, short legs, short neck. Evidently, he had bought into the long-legged Betty Grable ideal from the WWII pin-up posters, even though he married a very short lady. Why he felt the need to imbue me with the same societal version of beauty I don’t know. It’s what we do. We pass along our indoctrination to the next generation.

It took until my 60’s before I finally got shed of that BS and that was about the time I met another man who also told me I wasn’t beautiful. He had been married to the long-legged cheerleader. Of course, it fell apart or he wouldn’t have been in the market for another squeeze. I was already in a relationship with him when he told me I wasn’t and would never be beautiful.

I should have walked away right then. Evidently, I wasn’t as shed of it as I thought. Dad’s words still held a spot in my heart, in my gut. I believed it was the truth or I wouldn’t have been susceptible to his words. Funny how we will do everything we can to make our parents right even when they are out of the ballpark wrong.

Yesterday it became clear. I didn’t look in the mirror because deep within the physical, I too, had bought into society’s ideal of what beautiful is. The physical appearance mattered. Not the age lines, the cellulite, the c-section scar, the grey hair but the shortness — the short legs, the short body, the beautiful short body that would never measure up to society’s gold standard.

I laughed out loud.

If I was tall — I’d be too tall. If I was the perfect size (whatever that is) my nose or something else would be imperfect. There’s always something that wouldn’t be just right as long as we measure. at. all. It was never about height, or beauty, or anything that truly mattered. The belief made it matter and the belief was instilled at a very early age. That didn’t make it holy or right. It was just a belief that was still taking up residence in my head.

But that wasn’t the big ah-ha.

I had wondered why some days I looked in the mirror and saw and beautiful woman and other days I didn’t even look. Some days I was thin, other days fat, some days ageless, some days old. We see what we think. We see the natural inherent divine beauty that is our birthright when we are freed of the chains of belief. We see it, not just in ourselves, but in everyone.

And here’s the bit that I’m not sure I can fully relay.

What we perceive is an image transmitted through the layers of belief — what we take to be reality. That’s why diets work — when we believe we are eating less, that we are losing weight, we project a thinner image. It’s not because we actually eat less calories and the body made of matter actually loses weight.

This is a holographic world. Holographs don’t gain or lose weight. Food isn’t even real, let alone chock full of good and bad stuff like calories and toxins. Nothing holds a solid reality. Anything can change — appear different — in an instant.

Why doesn’t it? Because of hidden beliefs, basic beliefs that we don’t even know about let alone question. Seeing the belief clearly unravels it … to a point. Perhaps they aren’t all intended to be unraveled. Wouldn’t the image just go poof! I think that’s the way I’d like to die — see through the last belief and simply disappear.