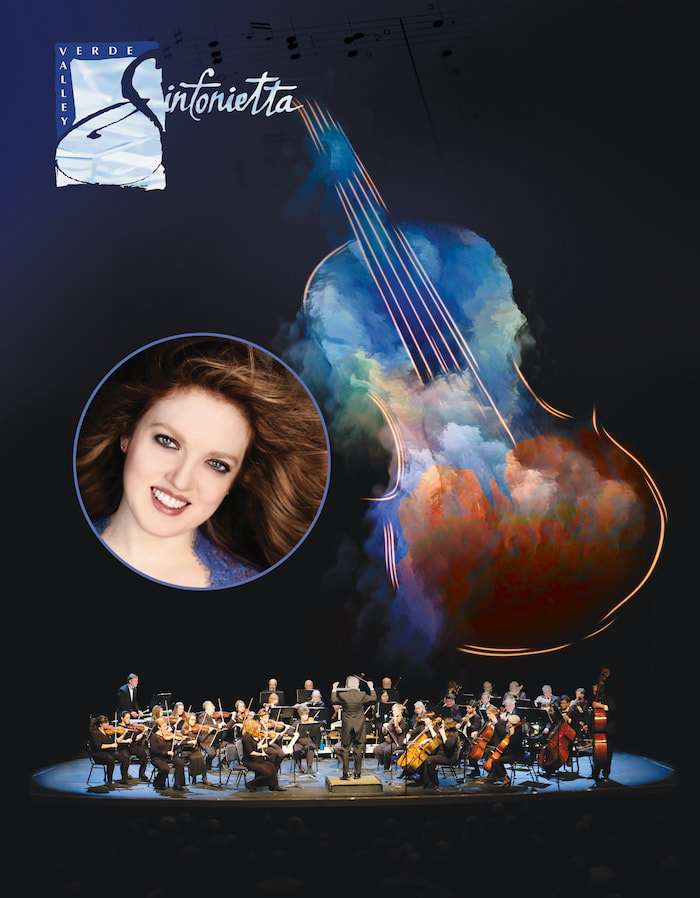 In recent years Pine has researched the works of well-respected Black composers whose works have been unjustly ignored by mainstream orchestras. According to the Sinfonietta’s Music Director, Kevin Kozacek,“Since this is the Martin Luther King holiday weekend, I thought we would showcase two fine works by Black composers as a way of paying homage to them. Rachel’s research and interest in this repertoire sparked my programming interest.”

The other work by a Black composer is Samuel Coleridge-Taylor’s “Four Novelletten.” In contrast to the works by White and Coleridge-Taylor, Kozacek has programmed Johann Wilhelm Hertel’s Concerto in Eb Major for Oboe and Trumpet, and Jean Sibelius’s Pelléas and Mélisande Suite, Op.46. Orchestra soloists for the Hertel are principal oboist Ruth Solin and principal trumpet Cindy Gould.

Rachel Barton Pine is known for her extraordinary ability to connect with people. A leading interpreter of classic and contemporary works, her performances combine her gift for emotional communication and her fascination with research. She plays with passion and conviction, thrilling audiences with her dazzling technique, lustrous tone, and infectious joy in music-making.

In addition to her performance with the Verde Valley Sinfonietta, this year Barton Pine will solo with the Chicago Symphony, the Mississippi Symphony, Orchestre Symphonique Quebec, the Tel Aviv Soloists, the Pacific Symphony, and Vancouver (WA) Symphony. She’ll perform with Lara Downes at Ravinia, with pianist Matthew Hagle, and harpsichordist Jory Vinikour.

She has appeared with prestigious ensembles including the Philadelphia Orchestra, the Royal Philharmonic Orchestra, Camerata Salzburg, and the Vienna and Detroit Symphony Orchestras.

Her past chart-topping albums include Dvořák and Khachaturian Violin Concertos (Royal Scottish National Orchestra, Teddy Abrams); Mozart: Complete Violin Concertos, Sinfonia Concertante (Academy of St Martin in the Fields, Sir Neville Marriner), and Bel Canto Paganini. In recent years she has soloed in the Brahms Violin Concerto with the Flagstaff Symphony and given a recital of the complete Paganini Caprices at NAU. Barton Pine performs on the 1742 “ex-Bazzini ex-Soldat” Guarnerius del Gesu.

The January 16th concert begins with Samuel Coleridge-Taylor’s Four Novelletten, Op. 52. Coleridge-Taylor, a gifted violinist, composed this colorful, romantic piece for string orchestra, tambourine, and triangle. The first movement has the flavor of a fast Viennese waltz. The second movement is reminiscent of Tchaikovsky’s sugar plum fairies. The violin solo at the beginning of the third movement announces a tragic mood, later dispelled by suddenly furious fast-moving rhythms. The militaristic fourth movement gradually changes mood and includes the tambourine and triangle once again.

Joseph White composed his Violin Concerto in F# minor in 1864. White performed the solo part for his concerto’s 1867 premiere in Paris. A critic described the piece as “one of the best modern works of its kind… The fabric is excellent, the basic thematic ideas are carefully distinguished, the harmonies are elegant and clear, and the orchestration is written by a secure hand, free from error. One feels the presence of a strong and individual nature from the start. Not a single note exists for mere virtuosity, although the performance difficulties are enormous.”

The Concerto in Eb Major for Oboe and Trumpet was written by Johann Wilhelm Hertel in 1754. Much of Hertel’s work is in the “galant style,” transitional between the Baroque and Classical periods. The first movement is reminiscent of the Baroque period with its perpetual motion sequences, contrapuntal writing, and frequent ornaments. The second movement has a Classical period feel with longer melodies and simple homophonic accompaniment. The third movement is a combination of Baroque and Classical styles as the oboe and trumpet engage in a lively musical conversation.

Jean Sibelius wrote the Pelléas and Mélisande Suite, Op. 46 in 1905 as incidental music for Maeterlinck’s 1892 play of the same name. As in the original stage setting of the play, the musical atmosphere is veiled and mysterious as the tragedy plays out. The woodwinds are showcased throughout the suite while the strings more often play a supportive role. Plaintive solos by the English horn stand out. Mélisande eventually dies by her husband’s hand after he discovers her treachery with his brother, Pelléas.

This concert is co-sponsored by: Susan Buffum, Darol and Dee Dee Jurn, John Martinez and Carol Palmer, and Al and Gloria Vander Peut. Discounted tickets are available on the Sinfonietta website: www.VVSinfonietta.org . Masks are recommended. Tickets at the door are available with surcharge.