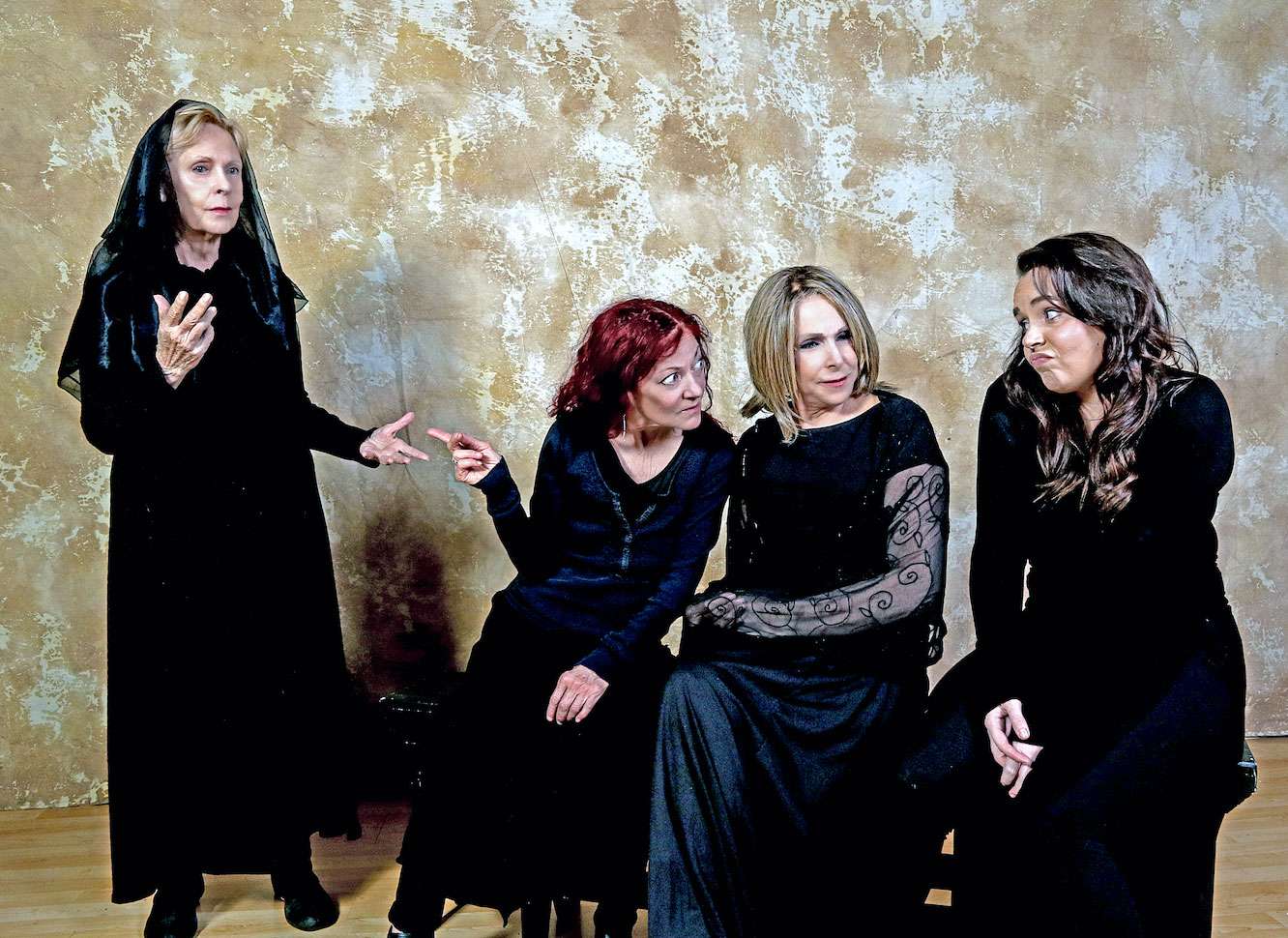 Red Earth Theatre brings a new play, written and directed by Kate Hawkes, telling the story of perhaps the most famous mothers’ love – Demeter for her daughter Persephone. Playing at the Studio/Black Box Theatre at Sedona Red Rock High School this 90 minute show gives you a new look at an old and very relevant myth.

This full production of the reading last year at Tlaquepaque, builds in that first rendition, with a new character (Charon, the corpse-like boatman) and an additional scene with Cassandra and Zeus. Hawkes buried herself in the Greek pantheon of Gods and Goddesses, myth, poetry and Greek plays discovering an unlikely love story between Persephone and Hades. As a mother herself, the push-pull between protecting and releasing our children was a resonant theme.

While employing the form of Chorus and Episodes, and placing the Chorus in masks, the characters are readily accessible and Persephone herself is a thoroughly modern daughter. The family includes the brothers Zeus and Hades and sisters Hestia, and Hera. It is the mortal woman Metanira, also a Mother, whose advice encourages Demeter to her ultimate act of fury to destroy the living world unless Persephone is returned from the Underworld.

Cassandra, with her gift of prophecy and the curse of not being believed, wanders between eras and perhaps is speaking of our times as well as the havoc Demeter is wreaking on her world.

As a playwright Hawkes has had numerous plays produced including the award-winning Sky…Diamonds, Loplop and the Queen (about Max Ernst and Dorothea Tanning), Traveling Through Shakespeare, and many 10 minute plays. She was also at the creative helm of Recycling with a Unicorn and Pink Nectar Café. In a screenplay draft an earlier version of Ungodly Behavior was a 1/4 Finalist in the 2021 San Francisco International Screenwriting Competition.

Performers include Kaia True and Abby Heydorn as Demeter and Persephone, with a Chorus of Terra Shelman (also Hera), Joan Westmoreland, (also Cassandra) Lisa Schatz Glinksy (also Hestia) and Audrey Young (also Metanira). Michael Gallagher brings Charon the Underworld boatman to life and Alistair Hake appears as Hades in his first production with Red Earth Theatre. Special guest Scott Coopwood (AEA) rounds out the cast as Zeus. While this is his first time on Red Earth Theatre’s live stage, Scott has been a participant in several Red Earth productions, as a coach/co-director on Midsummer Night’s Dream and in several of the online programs offered in 2019-21.

Visit the Red Earth Theatre You Tube Channel to see what Red Earth has been up to during the years when live theatre was on hold as they continued to work with over 50 performers, produce new work and support the community. You can stay in touch with them via newsletter and find more information on the website www.redearththeatre.org.

In this fast paced, thought-provoking play, issues of independence, over-protective mothers, family violence, climate change and brotherly competition and yes, love, arise. Nothing is as simple it seems, and we cannot know what is true for another, even our own daughters. The only way is to tell our truth and practice love for all beings. And, families are complicated.

This production is made possible with the generous support of Sovereign Laboratories, The Wyatt Gallery and a grant from the City of Sedona, as well as dedicated gifts toward this production from individuals in the community.

$20 in advance online at www.showtix4u.com and The Wyatt Gallery at Hillside Plaza, Sedona.