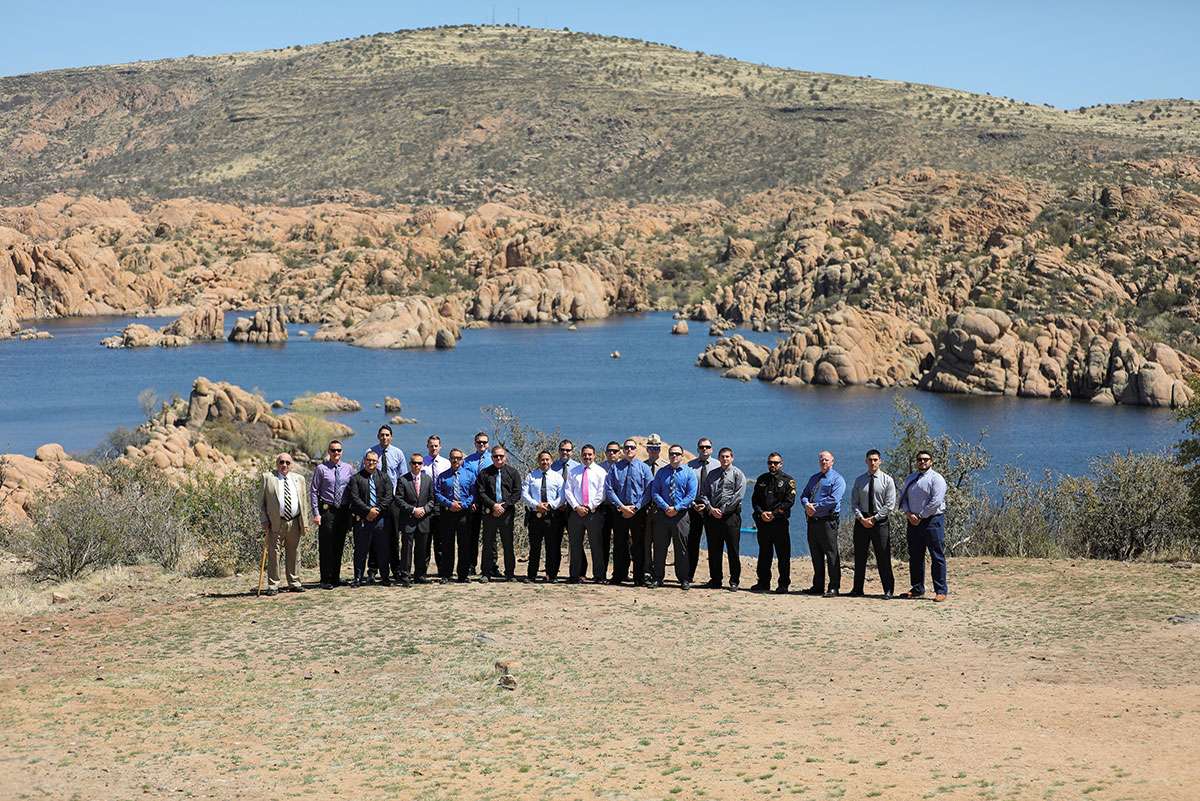 Yavapai County Sheriff’s Office Sgt. Michael Lewis and Department of Public Safety Trooper Thomas Humphrey instructed 13 Law Enforcement Officer students from across the United States at a Drug Recognition Expert course hosted by the Department of Public Safety in Prescott Valley from March 31 to April 20, 2022. The three-week class attracted instructors and students from law enforcement agencies all over the state of Arizona, and as far as Alaska.

Arizona is known for its high standards for instruction and certification standards, which is why instructors and students come from far and wide to teach and learn here. Under the management and guidance of the International Association of Chiefs of Police, this program is utilized in multiple countries around the world to include the U.S., Canada, Australia, America Samoa, Guam, the United Kingdom, and China. The DRE program was developed by the Los Angeles Police Department in the 1970’s and was adopted by Arizona shortly after.

To receive certification as a DRE, students must complete three phases of training, starting with two days of intensive “preschool” training, designed to prepare them for seven days of class work, and finishing phase three with three days of field certification training before taking the final comprehensive written examination. These certifications are valid for two years, after which time each DRE must recertify.

DREs are able to determine impairment from seven different drug categories: Inhalants, Cannabis, Central Nervous System Depressants like alcohol, Xanax, and lorazepam, CNS Stimulants like meth, cocaine, or Adderall, Hallucinogens including MDMA, LSD, and Peyote, Dissociative Anesthetic like ketamine, PCP, DXM, and Narcotic Analgesics such as fentanyl, heroin, or OxyContin. They are able to differentiate between these drug categories and determine impairment by following a systematic and standardized process which will allow the DRE to determine if the person is impaired and by which drug category or categories.

DREs are also able to differentiate between medical and drug impairment among the general motoring public. In some circumstances evaluations can discover underlying medical issues.

One such instance of this occurred in August, 2021 during a traffic stop on the 1-17
Northbound. A YCSO deputy made a stop on a vehicle swerving and traveling 55mph in a 65mph zone. The driver denied any drug or alcohol impairment but was slow with his verbal responses. The driver submitted to and failed a field sobriety test, at which time he was taken into custody. A YCSO DRE was called in to conduct a 12-step assessment during which he discovered the driver had elevated pulse and blood pressures and stopped the investigation to request medical assistance. The driver was then transported and admitted into the hospital for underlying cardiovascular issues not related to the substances he was ingesting.

“DRE is another tool for the law enforcement community to take drugged drivers off of the roadway,” said Sgt. Michael Lewis, YCSO DRE. “By having a highly trained law enforcement officer available to aid in the DUI Investigation, we can ensure that impaired drivers are removed from the roadway before incidents occur.”