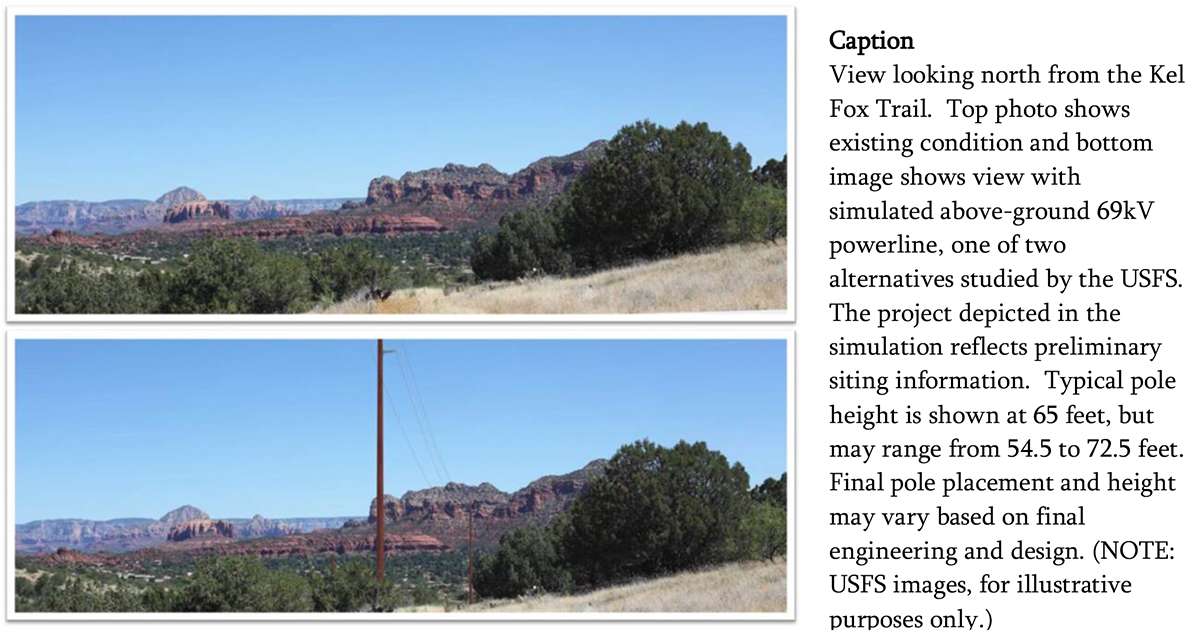 Big Park Regional Coordinating Council has submitted a detailed comment letter to the U.S. Forest Service in opposition to a proposed, above-ground Arizona Public Service (APS) 69kV Powerline Project from the Village of Oak Creek (VOC) to McGuireville. Most of the route would run across Coconino National Forest and require a special use permit from the Forest Service. On December 15th the Forest Service released a Draft Environmental Assessment (EA), initiating a 30-day public comment period.

Big Park Council supports a second alternative under consideration by the Forest Service, according to Council President Camille Cox. The second option under study by the Forest Service would require burial of the proposed 13.7-mile powerline along nearly the entire route – except the last mile into the Oak Creek substation. That final mile runs along a section of Highway 179 that is designated as the Red Rock Scenic Byway by the US Department of Transportation, considered to be a destination unto itself. Cox said the Council would also like to see this highly visible section buried to preserve the inspiring visual impact that greets motorists entering Sedona’s Red Rock country.

Big Park Council’s comment letter objects to the above-ground option for a number of reasons, including conflicts with Coconino National Forest’s management plan for the area, which includes preservation of scenic vistas and iconic red rock formations that attract millions of visitors to the area every year. The letter cites numerous other concerns including increased wildfire risks posed by a new powerline, potential negative impact to property values, and ignoring a federal directive to consider climate change when modifying the Forest Service’s local management plan. According to APS, the 69kV powerline is needed for backup in the event of power outages.

“We appreciate the Forest Service’s efforts in seeking extensive public feedback on this proposal, which has the potential of significantly blocking scenic view corridors in and around the Village of Oak Creek,” Cox said. “However, our surveys and forums have reflected strong community opposition to a new above-ground powerline, which would require installation of approximately 250 “self-weathering” 65-foot steel poles, spaced roughly 88-yards apart.”

Additionally, the Draft EA (Environmental Assessment) confirmed Big Park Council’s own consultant’s estimates that the long-term maintenance cost of the overhead powerline is far greater than a buried powerline – an expense that would be passed along to rate-payers, Cox said.

Consistent with a position statement approved by the Big Park Council last year, BPRCC also supports a feasibility study of a solar-powered community microgrid as another option, which would increase energy resilience, result in significant cost-savings for local residents’ electric bills over the long-term, and alleviate the need for any new powerline construction.

The Draft EA, which details project alternatives and discloses potential effects of the alternatives, is available for review and public comment at https://www.fs.usda.gov/project/?project=56977. Based on the EA analysis, the Coconino National Forest Supervisor will decide whether to allow implementation of one of the two alternatives studied, a blend of the two, or deny a permit.

Individuals who wish to comment may email the Coconino National Forest’s Flagstaff office at comments-southwestern-coconino@usda.gov or send a letter to its office at 1824 S. Thompson St., Flagstaff, AZ 86001.