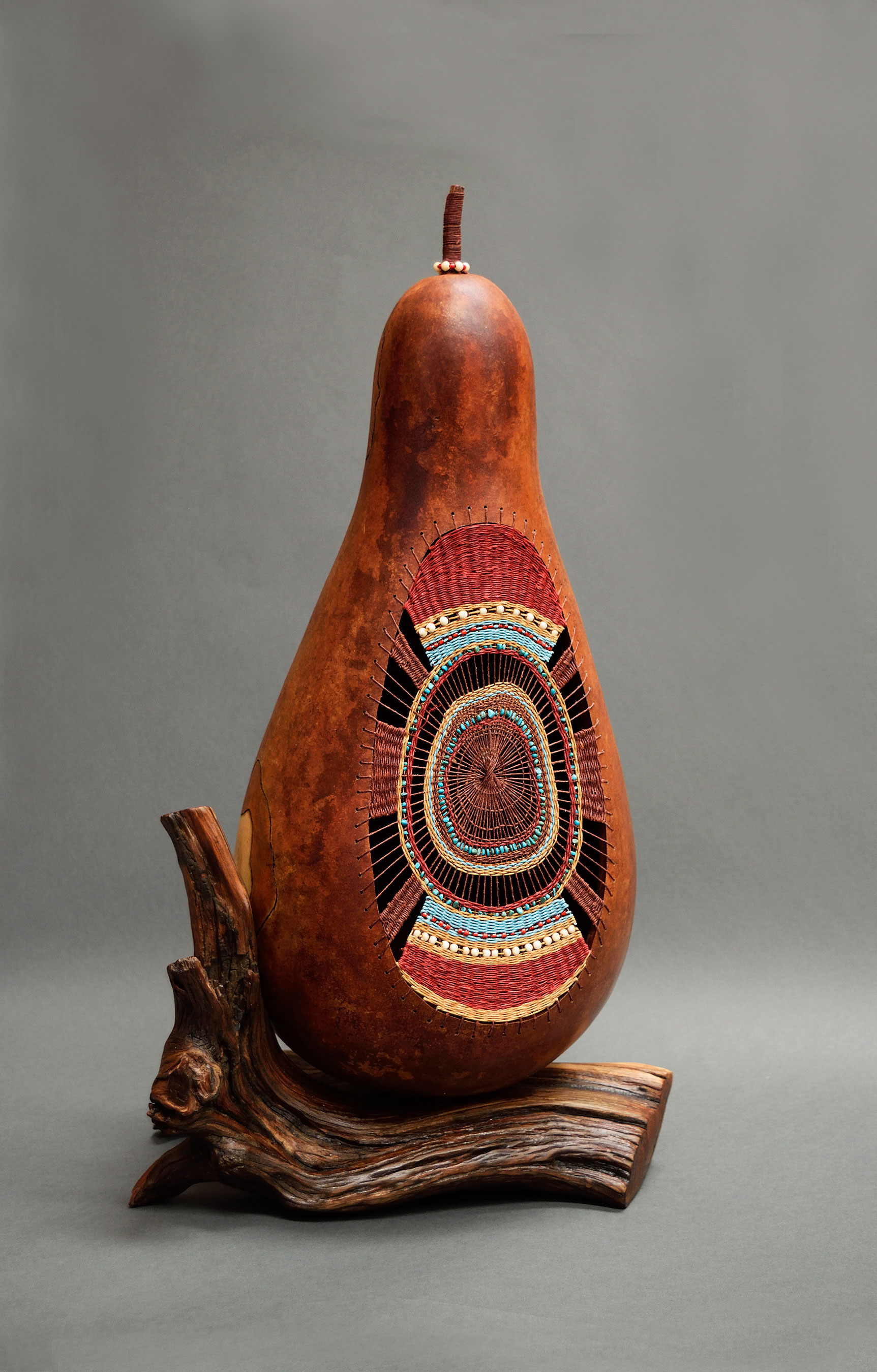 Last month was just the beginning.

Rowe Fine Art Gallery’s two-part summer show, A Feast for Your Eyes, kicked off with an evening dedicated to the gallery’s painters in July. The fun continues in August when the sculptors and jewelers step up to the plate. Enjoy the latest works from Shirley Eichten Albrecht, Liam Herbert, Jennifer Inge, Kim Kori, Alvin Marshall, Erik Petersen, Joel Petersen, Ken Rowe and Joshua Tobey. The show opens at 4 p.m. on Friday, August 5, and runs through the month.

Shirley Eichten Albrecht is excited to debut Regalia, a tall-body gourd that rests on a piece of manzanita her neighbor discovered on his property. The front of the gourd features Shirley’s intricate weaving, which captures pieces of turquoise and antique bone within its web. She chose to highlight the natural markings on the back of the gourd using a wood-burning technique and various colors of gourd ink.

“After much contemplation and some research, I decided on the colors I was going to use,” says Shirley. “What kept coming to mind was Native American regalia. My research brought me to images of various regalia, and I incorporated those colors into the sculpture. There is simplicity but also strength in this piece.”

Jeweler and sculptor Liam Herbert’s latest pendant, Family Embrace, will be showcased in August. The pendant, part of Liam’s Inspiration Collection, depicts two adults and a child in a fierce hug. On August 5 only, Liam’s bronze, The Sound of Life, will also be exhibited. The bronze features a pregnant mother and a child. “The sound of the first heartbeat is a very magical moment for anyone who hears it,” says Liam. “I wanted to show the tenderness of a mother and child experiencing this precious moment together.”

Bronze wildlife sculptor Kim Kori reminds us that sculptures are produced in limited editions that do, indeed, sell out. Four of Kim’s most popular sculptures are almost entirely gone. Everyone’s favorite lovestruck frog perches on a mushroom in Amore. A hummingbird pauses to catch his breath on a shiny pear in A Moment’s Rest. And a side-blotched lizard contemplates a bee on the stem of a chili pepper in Heat of the Moment.

RV features a clever mouse hitching a ride on the back of a box turtle with the help of a tempting, juicy strawberry suspended from a stick. “I’m familiar with box turtles, having rescued a few,” says Kim. “Not only are they fond of fruit, they are also very much attracted to the color red, making strawberries high on their list of delicacies. When I wanted to sculpt a turtle being tempted by a berry, I decided there should be someone operating the ‘vehicle,’ and a mouse seemed to be the likely candidate. I used live models for accurate depictions of both creatures. I find my imagination to be vital in my life, and I often entwine it with reality in my sculptures.”

Navajo stone sculptor Alvin Marshall is also known for taking inspiration for his one-of-a-kind pieces from real life, and his newest sculptures don’t deviate. Alvin’s granddaughter was preparing for a coming-of-age ceremony this summer, which prompted Alvin to create multiple pieces, all small in size, depicting a young girl as she readies herself for the responsibilities of adulthood. The sculptures will feature the girl running, singing and holding a hummingbird. “Because time is of the essence with these, I’ll be using alabaster,” Alvin explains. “I have a steady supply of it.” Alvin will be headed to the prestigious Santa Fe Indian Market later this month, but Sedona residents and visitors won’t have to travel to see this award-winning artist’s latest work.

Joel Petersen is putting the finishing touches on his third bison sculpture. The new, not-yet-titled piece will be approximately six inches high by nine inches wide. Though Joel lives in Prescott these days, he grew up in Wyoming where he developed a profound appreciation for the wild bison that call the area home.

Joel’s son, sculptor Erik Petersen, also a Prescott resident, won’t be unveiling any new works this summer, but art lovers will still be able to enjoy his perennially popular Ain’t No Mountain High Enough – now available in two sizes – depicting intrepid ladybugs scaling a stack of rocks. Spot, which features a spotted owl, and The Perfect Pair, showcasing ladybugs on the stem of a piece of fruit (and almost sold out!), will also be available.

Award-winning bronze wildlife sculptor and gallery owner Ken Rowe recently decided it was time to get back in the action – literally and figuratively. At the show, he will unveil a precast piece titled Alpha. “In my mind’s eye, I could see a large wolf, racing through the trees,” says Ken. “The story I want to convey is one of strength, speed, and leadership as a wolf guides his or her pack with a confident, powerful stride. I don’t know if I can pull this off, but I’ll let viewers be the judge. They can come see for themselves on August 5.”

There are plenty of enticing reasons to visit Rowe Fine Art Gallery in August, including Jennifer Inge’s exquisite horsehair jewelry and Joshua Tobey’s impressionistic wildlife bronzes. (Mark your calendars: Joshua will be back in the gallery October 28-29 for his annual one-man show.) Bring your appetite for art!

Rowe Fine Art Gallery represents traditional and contemporary southwestern artists. The gallery, located under the bell tower in Patio de las Campanas at Tlaquepaque Arts & Shopping Village, is open Monday through Thursday, 10 a.m. to 5 p.m., and Friday through Sunday, 10 a.m. to 6 p.m. For more information, call 928-282-8877, visit rowegallery.com, or find us on Facebook, Instagram and Twitter.