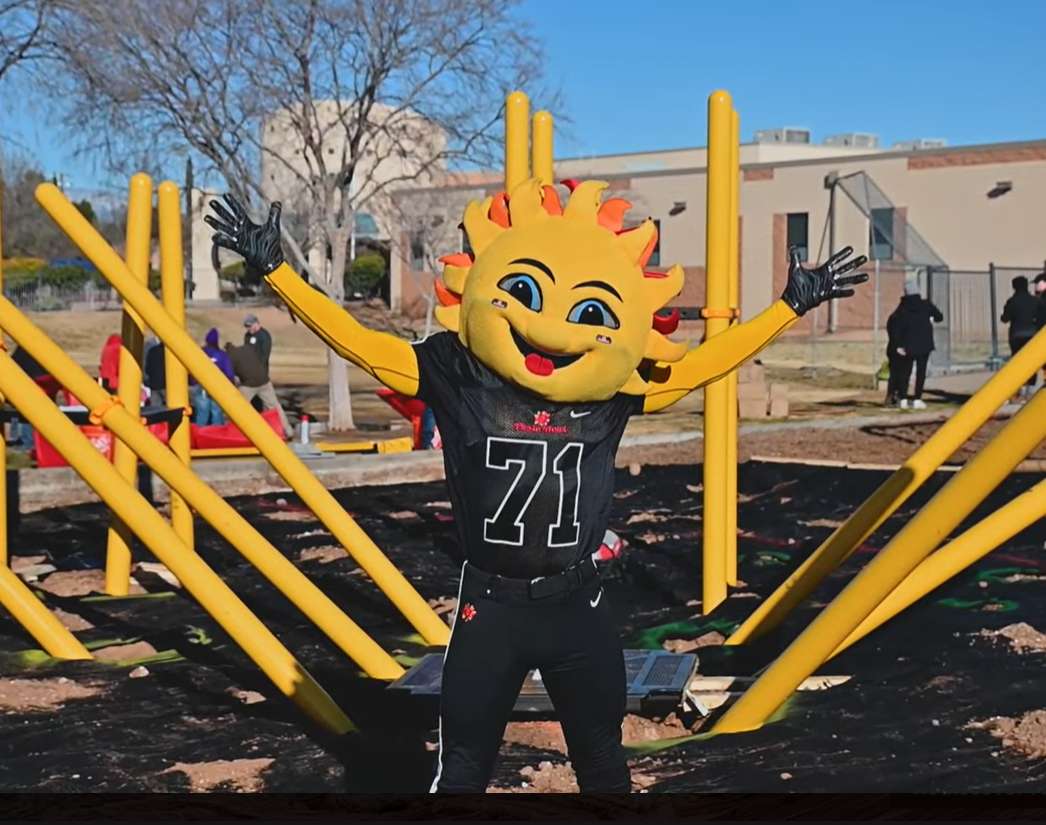 In November, children from Camp Verde Elementary School were asked to share drawings of what their dream playground would look like. Fiesta Bowl Charities, SRP and KABOOM! came together to make those dreams a reality, taking the children’s visions and incorporating them into the design.

On Friday, February 25, more than 50 volunteers gathered at Camp Verde to build the state-of-the-art playspace from the ground up.

“Building playgrounds are part of our legacy projects at Fiesta Bowl Charities because we know the lasting impact,” said Fiesta Bowl Community Relations Director Kristina Chumpol. “This is going to impact the kids that are going to the school today, and will be here 10 years from now and generations later for those children to enjoy.”

The new space will serve the 700 children that attend Camp Verde Elementary, and hundreds more that live in the community. In addition to the new structure, volunteers helped spruce up the campus with new sidewalk games.

From the beginning of the process, Camp Verde students, faculty and community members were heavily involved. The goal was to provide additional access to play, as well as more opportunities for creativity and teamwork.

“We told kids that they were going to design a playground and they were so excited. Each teacher facilitated a design process within the class, then students met with KABOOM,” said Camp Verde Elementary School Principal Jaclyn Campbell. “They shared a lot of very imaginative ideas for this playground. Through that process we were able to take the kids’ ideas, look at all of the different pieces of equipment we could have on the playground and put it into action.”

Camp Verde Elementary’s previous playspaces have been around for more than 20 years and children in the surrounding area have limited access to new parks and new equipment. The newly installed obstacle style playground – complete with rock wall, double racing slides and zipline – will introduce fresh play into the community.

“SRP’s tradition of service and community extends beyond the Phoenix-metro area. As a community-based, not-for-profit utility, we share an important connection with watershed communities like Camp Verde because of the Verde River and what it means to both of us,” said Lucas Shaw, SRP manager of water rights. “We accomplished something special in one day. My six-year-old is asking when we can go play on the new playground. As neighbors we work together to protect the river, just like we worked to build that special play area at Camp Verde Elementary that has an immediate and lasting impact for children.”

Sponsored by SRP, as part of its 2021-22 grant cycle, Fiesta Bowl Charities granted KABOOM! funding to help build this playground to promote and protect a child’s right to active play at home, at school and in the community. SRP has been a partner for three KABOOM! playground builds with the Fiesta Bowl, with another scheduled for the Fall.

“Playgrounds are an iconic part of childhood. They’re where kids collect some of their best memories, and also where crucial skills are developed that nurture their physical, mental and emotional well-being,” said Lysa Ratliff, CEO of KABOOM!. “KABOOM! is thrilled to work with the Fiesta Bowl & SRP to bring to life the new playspace at Camp Verde Elementary School and ensure that kids in Camp Verde have a place designed just for them, where they can play, learn, and unlock their greatest potential.

Play is essential to physical, creative, cognitive, social and emotional development. KABOOM! and Fiesta Bowl Charities have a long-standing partnership of enhancing the lives of Arizonans through play. As part of the Fiesta Bowl Legacy project, playgrounds have been built by volunteers throughout the state over the last six years.

About the Fiesta Bowl Organization

Since 1971, the Fiesta Bowl is a world-class community organization that executes innovative experiences, drives economic growth and champions charitable causes, inspiring pride in all Arizonans during and outside of college football bowl season. As a nonprofit organization, it is driven by its vision for the importance of community outreach and service. Through the PlayStation® Fiesta Bowl, Guaranteed Rate Bowl and its year-round events, such as the Fiesta Bowl Parade presented by Lerner & Rowe, corporate partnerships and numerous community events throughout the year, the organization provides charitable giving to enhance Arizona nonprofit organizations that serve communities through youth, sports and education.

KABOOM! is the national nonprofit committed to ending playspace inequity – the reality that quality places to play are not available to every child, especially in communities of color. Since 1996, KABOOM! has partnered with kids and communities to create or transform 17,000+ playspaces and ensure that nearly 12 million kids have equitable access to the crucial benefits and opportunities that playspaces offer. In 2022, KABOOM! launched the 25 in 5 Initiative to End Playspace Inequity, the $250 million plan to accelerate its mission in 25 high-priority locations over five years. Learn more at kaboom.org or join the conversation on Twitter, Facebook, Instagram, and LinkedIn.