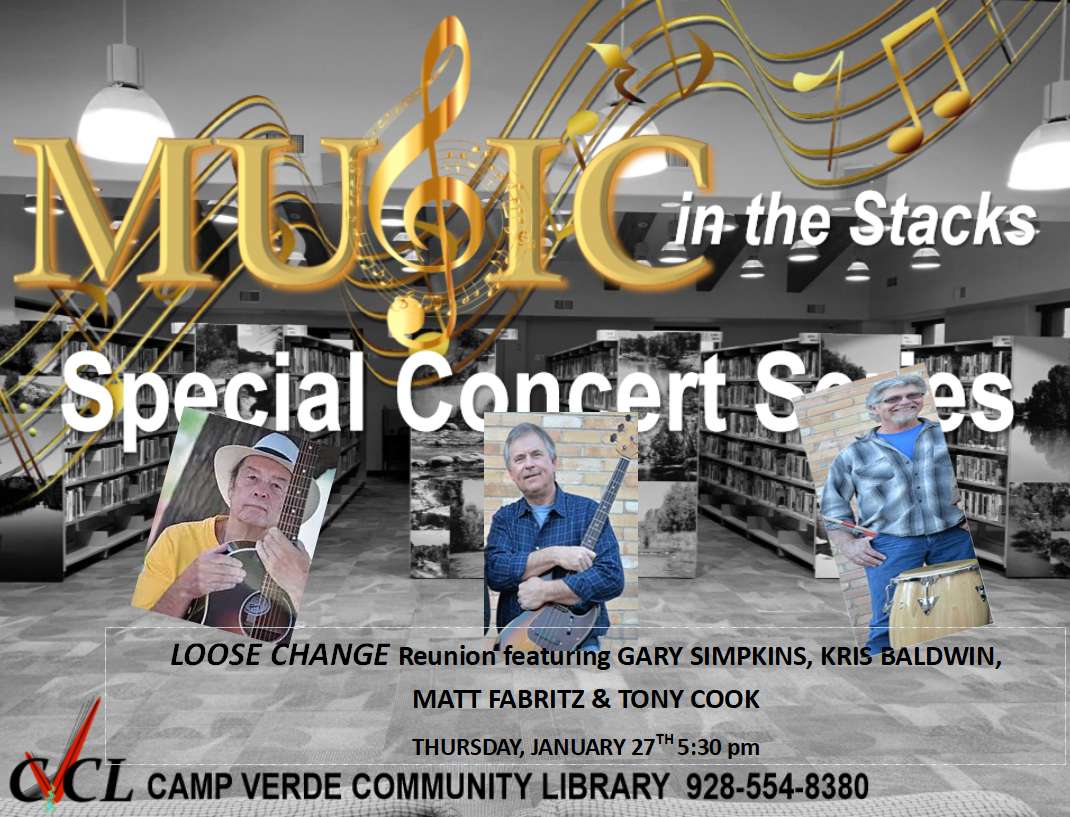 Join us on Thursday, January 27th from 5:30-7:00 pm in Camp Verde Community Library’s Fireside Room for our next free Music in the Stacks Special Concert Series with Gary Simpkins and Loose Change.

Music in the Stacks Special Concert Series is a showcase of local and national musicians who entertain regularly in Northern Arizona. There will be one band or solo artist that plays for the duration of the concert with a different artist playing each month, on the 4th Thursday.

January’s concert features the return of local favorites Gary Simpkins & Loose Change. This solid and dynamic group of performers has played a number of shows together in the Verde Valley. The current band members include Gary Simpkins, a performer/singer/songwriter with plenty to say and plenty to sing about, visiting Winnipeg Canadian Kris Baldwin, bassist and singer for this ensemble and a wonderful singer/songwriter in his own right, Flagstaff’s Matt Fabritz, long time percussionist for many rock and country bands in northern Arizona, and Tony Cook, an accomplished musician and Arizona fiddle icon. Together their harmonies, leads, and rhythm section provide a powerful yet pleasingly full sound that will raise you up and take you on a musical magic carpet ride.

Gary Simpkins has been around the folk/rock, singer/songwriter scene since the ’60’s, cutting his teeth on the Open Mic scene in his college days in New Haven. He’s played gigs all over the Northeast, notably at the Bitter End in New York City, Club 47 (Now Club Passim’s) in Cambridge, the Exit in New Haven, and Salt in Newport (where he opened for Maria Muldaur). “No time in history did music make as much of a difference than in the ’60’s,” reflected Simpkins. “Many of the songs I do, including songs by Dave Mallett, John Phillips, and, of course, Bob Dylan, are more than just protest songs. They are a mirror into everything ’60’s – the war, politics, social justice, free love – everything.”

In impromptu jam sessions Gary seems to know just about every tune written and performed during that period. And he always has a great rendition of these songs to pull out. From Ian Tyson’s “Someday Soon” and “Me and My Uncle” by John Phillips, to Bob Dylan’s “This Wheel’s on Fire”, Simpkins is just comfortable with the times. The band members share a similar set of musical sensibilities, and when they play it seems like they’ve been playing together for years.

Gary moved to Arizona in the ’80’s and for the past 25 years has been playing folk festivals and shows throughout the region in and around the Verde Valley. He has also almost continuously run open mikes since the ’60’s, and is dedicated to giving new musicians the same mentoring that he had when he started out in New Haven.

Come and experience the power of ’60’s, ’70’s, and ’80’s folk/rock with passionate musicians who bring a rich personal history to their performances on Thursday, January 27th at 5:30pm at the Camp Verde Community Library.

Camp Verde Community Library is located just off of Montezuma Castle Highway at 130 Black Bridge Road, Camp Verde AZ. For more information about this or any other library program, visit the library’s website at www.cvlibrary.org or call 554-8391.